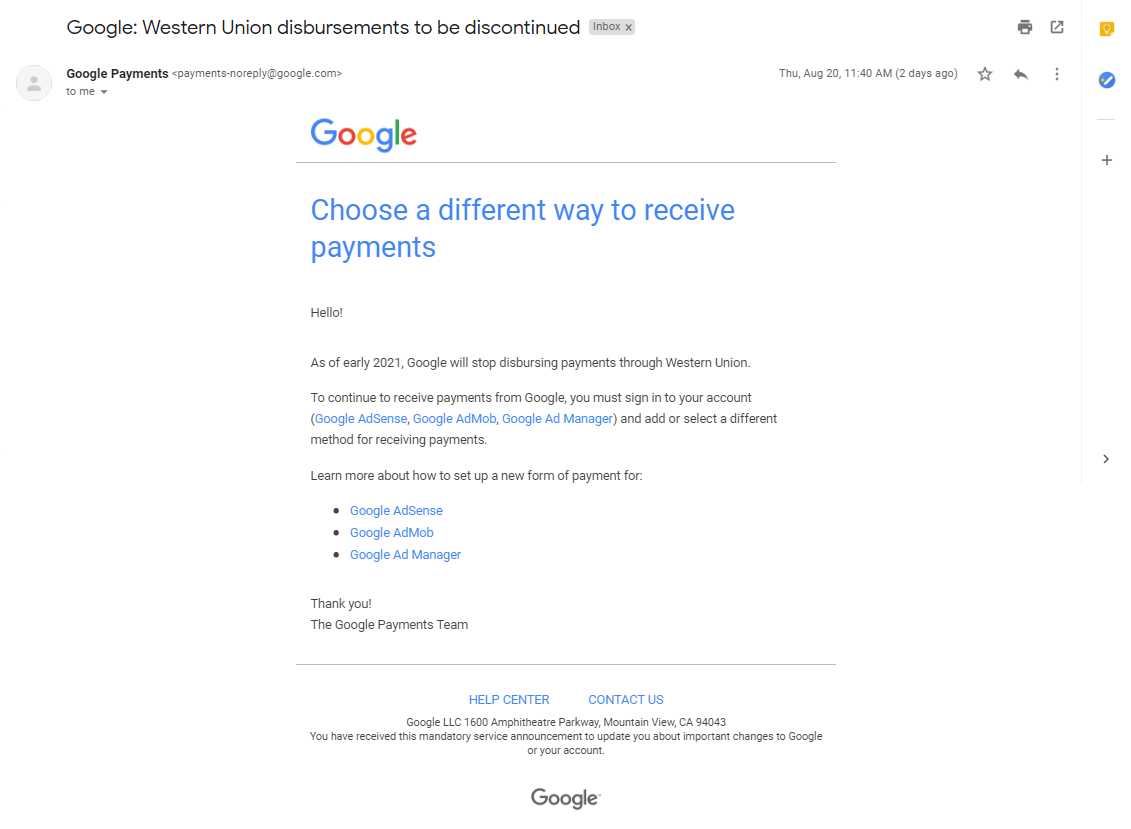 On Thursday, Aug 20, 2020, Google Announced to shut down its payment service via Western Union for worldwide users at the starting of the new year 2021 who are receiving their payments via Western Union.

I’m not sure that this was due to COVID-19 or not, but again I said that it makes issues for many peoples.

Why People Use Western Union?

Overall, Western Union is an expensive company with a huge advantage over its competitors: it has offices all over the world and can complete a money transfer even in the most remote locations. Here are the advantages and disadvantages of using Western Union.

What we DON’T like about sending money with Western Union:

Western Union: Is it a scam?

Western Union is a company founded for years and it is not a scam. However, this company’s service and surprise charges are a nightmare for users around the world, every day.

While it is possible to have a smooth transaction, Western Union is the worst option for transferring currency, unless it is the only option available to you in your country.

However, it is the largest money transfer company in the world and we have to give them an approval rating for that, in this category.

Our analysis of Western Union reviews on the Internet reveals that a large portion of its customers are dissatisfied, as feedback is generally negative.

These were the most common positive comments and complaints with Western Union money transfers:

The users of this company write with a characteristic frustration and hopelessness that is evident from thousands of comments that can be found on the Internet. This company welcomes its clients from all over the world, from a wide range of backgrounds, income levels, and education.

As such, widespread exploitation service reports are the norm, as users discover exorbitant fees or commissions and abusive and incompetent service.

Rates are variable and often come as a surprise. The Western Union website admits that “fees start at $ 4.99 to send up to $ 20 online.”

But they never explain what the full range of fees is. With the base fee being at least 25% of the total transferred, this fee structure should be considered unusual and usurious. For mobile transfers, the fee is more reasonable but still very high: $ 1 for up to $ 10 sent.

Exchange Rates: Our research, and feedback from hundreds of users, indicates that Western Union’s quoted exchange rates are often very poor. It is possible to obtain cheaper rates even from banks in certain cases and currency pairs, while it is reasonable to believe that companies like Direct Currency are always going to consistently outperform their quotes.

Limits: from $ 1 to $ 50,000, or the equivalent in another currency. But depending on what currency you’re sending and where, there could be any of the dozens of limits this company imposes, like with standard web transfers that fill in the $ 20 amount before charging higher fees. Because there is no universal standard, these limits are excessively complex.

From everything we were able to investigate through customer complaints, we have concluded that WU’s fees are outrageous.

Company size: Western Union is a huge company, with service offices located around the world. As a coin transfer provider (among its various other services), the company is perhaps the oldest.

Founded in 1851, Western Union was a telegram service for most of its history. As their brand and infrastructure spread around the world, they became the most popular channel through which to send and receive funds or remittances.

Today its methods are outdated and deeply flawed, showing the company for what it is: an old broken model, adapted to operate in the modern world, but failing on all fronts.

For example, the company requires codes and a lot of documentation on both sides for even the simplest transaction and charges huge fees when it comes to remote destinations. This kind of hassle is absent from almost all remittance-friendly companies, founded in the new millennium.

Its only salvation has been the great extent of its coverage. With service offices in hundreds of countries and many third world countries, most of the top currency exchange services simply do not have the global reach of this company. It is very likely that, if you are in a remote place, Western Union is your only option. In all other cases, avoid this money transfer company as much as possible.

Western Union offers forward contracts, spot contracts, and perhaps others. But these are generally made available only to business clients. Western Union generally does little to ease the financial burden on its largest customer base: poor remittance senders.

Mobile App – Western Union’s currency transfer app maybe its brightest side. Although it is still expensive to use, and a lot of users complain about failures, it seems to work more often than it fails.

We hope that our guide to the advantages and disadvantages of Western Union will help you get all the details you need to know about this money transfer company. Remember that, if you have any doubts or questions, you can leave us a comment and we will help you out of your concern.

Is it a Western Union scam? Is it worth sending money with Western Union? We want to know your opinion. If you have had any experience (good or bad) with this company, leave us a comment below and tell us your opinion.